Student loan calculator and financing life in the quad

Student loans weren’t around for the most part of my uni education, but the good old-fashioned calculator was. The NZ Government introduced student loans in my final year, which was the year I decided to skip town. I chose the more exciting alternative of partying it up in Sydney, which was enticing compared to scratching my head during a stressful exam. Boy did I regret that move after returning to discover that my days of free education were over.

I didn’t want a student loan

My punishment for running away was to work three jobs to pay for the last leg of my undergraduate degree. A loft above a printing factory was home and the production warehouse for Xena the Warrior Princess was next door. I remember the weary crawl into bed at 9.30pm every night, up a rickety ladder. My get-out-of-debt plan was to work 9am to 9pm, seven days a week. I would work through summer for as long as I could handle it.

Yep. I really needed the money.

Tip: Need a calculator? There are plenty in the Calculator category in the Savings Room!

Living on a budget to avoid getting a student loan

I finally figured out that the room in the flat was a bargain for two reasons:

Secondly, the cast and crew of a TV show about a warrior princess (our lovely Xena) also rise early at around 5am. They spend their mornings making human, as opposed to machine-driven, screaming noises. This would be fine if I hadn’t been in a self-induced, work-myself-to-death, coma then. For a moment, this state-of-being caused me to forget where I lived, who I was, and why I was where I was.

In this moment, the Xena show screams would seem real and I would wake in a panic. Actually they were real. The actors chasing Xena around that warehouse were screaming – for real – on the other side of my bedroom wall.

Shortly after waking, I would realise that not only had I been rudely awakened by machines and warriors, but I was not a star of anything – not even my own show! That my life as a non-star was crap, crap….and so, so…CRAP!

That’s about the time I would roll over and imagine Fiji or go to a place in mind I reserve for pretty fairies. I would try to forget Xena by pulling pillows over my ears. Nevertheless, even if I couldn’t hear Xena and her warriors; the fairies in my head would look like her. I just couldn’t get the machines, or Xena or those noises out of my head.

The last straw in my unhappy mornings, as a broke student, would happen on my way out the door. I would say a rushed hello to my flatmate (the printer guy) who I barely knew. Our conversations were always loud because we’d be yelling above his always-switched-on, badder-than-bad-ass, printing machine.

On my way to the car, I would almost trip over one of Xena’s paper mache rocks. And so my day would begin….

Life lesson: Unfortunately my calculator couldn’t tell me that movie sets are noisy at 5am in the morning!

My seven-day week at work consisted of being a customer-service-rep by day and waitress by night. I spent my weekends working at the local markets selling hats, pottery and gourmet garlic-chili mussels. (OMG the mussels were AMAZING and a silver lining in my sad working-too-much life.)

At the markets, I made friends with other overworked multi-faceted people. The woman in the stall to the right of me (selling Balinese-wear) was an award-winning country music star, aerobics instructor and dental assistant. She let me name her second album – nice of her. The Chinese man, selling handbags to the left of me, turned out to be a surgeon. He was waiting on a license to practice medicine in NZ. Finally there was the woman spruiking Whoopee Cushions behind me, whom I later discovered went on to become a millionaire! Wow! I was in the wrong game.

As far as Uni went, I remember the days without student loans the best. I’d spend my days wagging lectures, drinking coffee in the quad café and playing Please Release Me (by Def Leppard) on the jukebox. We’d play the song to clear tables because it was such a loud song for a small cafe. The result was a mass exodus of café-goers and the guarantee of a seat each. It was a cheeky and effective trick.

Back then, there were no mobile phones or tablets. We’d do an odd thing and talk, to each other, across a table, without anyone downloading an app, or playing on Facebook or text messaging their mate. I also remember the white Safari suit I went nightclubbing in and when my nifty typewriter became a word processor. Times have changed, but my time at typing school was never wasted. I sure am happy about that.

Note: I am still using an old-fashioned calculator. One of those nice oversized ones!

Action it:  Work out the cost of being a student > Scroll down to access the calculator

Eventually, my friends and I graduated, and we went traveling. Travel adventures added culture to the mix of fashion, boys and music. With much delight, I discovered that the world was full of wonderful adventures. I settled in Japan for four years where I discovered a teaching English gig which allowed me to work short hours, sleep in until midday, and sing Karaoke until 5am. I ate ‘Fugu’ (poisonous Pufferfish), learned to speak with my hands and taught myself impressive sentences like:

In addition, my Japanese students would take me out for free Gyoza and Sukiyaki dinners, put me up in flash hotels and take me on their family skiing holidays in Nikko. I would do all of the above whilst getting paid $50,000 USD a year and working 25 hours a week!

I wasn’t coming home in a hurry to a real job, in a western world. I was living like Xena the TV Star in Japan and loving it!

Eventually, time and family brought me home but returning home was a shock. It was time to get real.

It was time to dig out my old calculator and work out the damage!

The cost of being a student

Fast forward a good 15 years, and now I am a busy mother of two. I’m looking back on those years and wondering how I can help my little ones get the valuable education they need. I don’t want them to go through the financial hardship I had to go through.

Take a look at the following infographic to see what students are facing in this era. 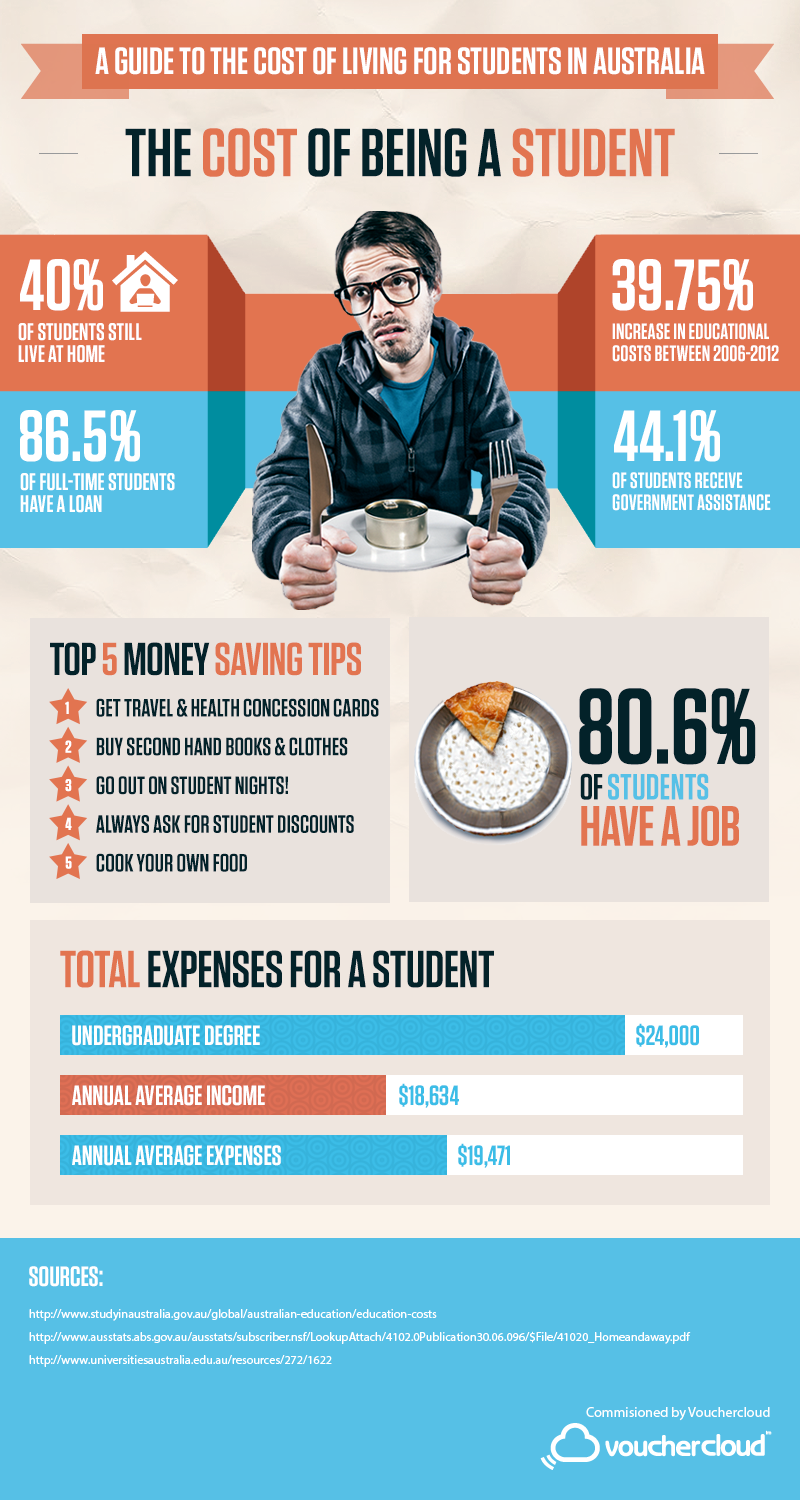 Student loans in the next generation

In terms of my kids, I can’t imagine what the cost of an education will be. The last time I checked the average age of young people leaving home was 27! More students are choosing to stay home longer to avoid the expenses associated with living in shared accommodation environments.

So as a mum, who had babies late (my 2nd at 39), I’m figuring I’ve got a long road ahead of me. According to this statistic, my 2nd child might be living with me until I’m 66!

Tip: Use a physical calculator to add up your bills each month. Keep track of your money daily.

As a parent of any age, it is important to plan for a child’s education. Personally, I am getting organised now so my kids can enjoy an easier ride than I did. I don’t want them to experience the too-hard side of life at Uni, working three jobs and getting woken up by bad-ass printing machines.

The following calculator helps to define the cost of building an education fund. I’ve set up an account at Ubank, which I contribute to regularly via direct debit. My contributions may not pay for my child’s entire education, but with compound interest, they will help my child enjoy a quieter student life than mine! One where my child studies more and works less.

Who knows? If my typewriter has turned into an iPad, my kids might get the chance to fly to Mars and back. Whatever their future holds; they’ll need a little help from their parents and a good education.

Here are some quick tips before you use the mortgage calculator